I talk to drivers every summer who are struggling to get their truck registration renewed. June is an especially bad month because it seems that some states require the 2290 before it’s even available for filing.

This has always bothered me, because it doesn’t make any sense. I’ve spent countless hours arguing with tag offices and DMVs because they can’t require a document that isn’t available yet!! They can’t require something that isn’t due!!  As Spock would say, “It is quite illogical.”

In the past if my arguing didn’t work for drivers, I’ve advised them to call the IRS to complain about their local tag office or DMV, to see if the IRS would intercede for the driver. That only gets people so far, and for many, it’s not far enough.

But just yesterday, I finally found the legal code that backs up the logic we knew all along (would that make Spock happy?). It seems that logic and practical information do in fact prevail, even at the tag office.

The Logic is Right

I found the IRS legal code that (believe it or not) mirrors the logic. It says that if your truck registration is due in July, August, or September, your local state tag office is required to accept the previous years Form 2290. They cannot ask you for the year that has just started.

Roughly Translated: if your registration is due during the summer, you’re allowed to use your Form 2290 from the previous year. Even though that 2290 is expired.

If this situation describes you, or anyone you know, please print this article and take it with you to the tag office. Hand it to them if they have a problem with your Form 2290.

It Gets Even Better

The IRS Form 2290 Instructions now say the same thing. If you register in the summer, the state must take last year’s form 2290.

If you’ve read anything I’ve written before, you know I like examples, so here comes one! 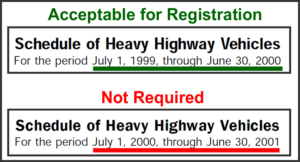 What does this really mean?

It means that you have a reasonable amount of time to file Form 2290. It means that logic prevailed! It means that when the tag office is being unreasonable, you can MAKE them be reasonable. It’s the LAW – and they have to abide by it just like the rest of us!

If your registration is due in June, July, August or September, it means things are about to get better.